My Aunt Olive was the oldest sister of my father.  She was born 9 May 1920 to Frank (36) and Muriel (24) in Russell, Manitoba, Canada.  She would move with her family to North Dakota around 1922 and then to White Bear Lake, Minnesota around 1928, where our Grandpa Frank would minister at an Episcopal church called St. John in the Wilderness.  Our grandfather Frank passed away in 1945.  I have attached a PDF copy of portions of a history of that church with pages pertinent to our grandfather.

St Johns History with Frank only

From that history I discovered that Olive was first married to James Bernard Baine.  James had enlisted in 1941 and served in the U.S. Army Air Force during WWII.  Olive and James married 21 May 1943 in Jacksonville, Florida.  Staff Sgt. James was killed in action on 24 January 1944 (only 8 months after they were married) and was buried at the Cambridge American Cemetery (plot F, row 3, grave 77) in England.  He received the Air Medal and Purple Heart awards.  Olive was working as a defense worker according to the marriage certificate and still listed her residence as White Bear Lake, so I am not sure how the Florida thing figures in. 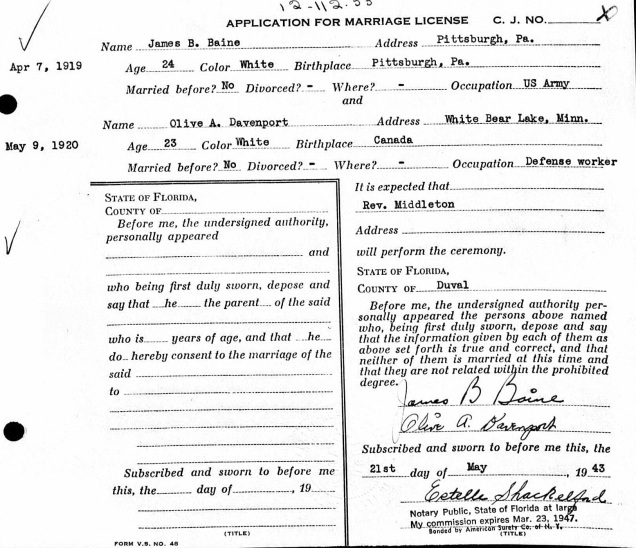 Olive married Donald John McArdell 17 March 1945 and they had four children; John, Susan, William and Thomas all living and a part of my first cousin clan.  That first cousin clan is larger than I thought but more about Uncle Mickey and that subject on another post.  Olive passed away on 4 August 2002 and Don passed away 29 June 2003.

One last interesting fact about Olive and Don: Olive and Don are sixth cousins two times removed, according to a formula I found and the following information linking them both to a common ancestor:

For ref. here is the formula:

“There is a mathematical way to identify the degree of cousinship shared by two
individuals. In the description of each individual’s relationship to the most recent
common ancestor, each “great” or “grand” has a numerical value of 1. The
following examples demonstrate how this is applied.

Example: If person one’s great-great-great-grandfather is person two’s grandfather, then
person one’s “number” is 4 (great + great + great + grand = 4) and person two’s “number”
is 1 (grand = 1). The smaller of the two numbers is the degree of cousinship. The two
people in this example are first cousins. The difference between the two people’s
“numbers” is the degree of removal. In this case, the two people are thrice (4 — 1 = 3)
removed, making them first cousins three times removed. “

Who knew in February that I could get a walk in 75 degree weather!  We went to a park called the Highbanks which is on the north side of Columbus, Ohio and had a great walk with myself, Lia and my granddaughter Emma leading the way.  There were many trails to explore and we took the overlook trail.  Will have to hit some of the longer trails on another day.  Here are a few pics of our walk, which I am sure will be much prettier once the leaves and foliage turn green.